Economist Adolfo Sachsida, who was head of the Special Advisory for Strategic Affairs of the Economy Ministry, was appointed the new minister.

Albuquerque had differences with Bolsonaro about the government's claim that the state-owned oil company Petrobras should contain the increase in gasoline, diesel and household gas prices.

Last week, the publicly-traded company disclosed record profits in the first quarter of the year, 38 times higher than the same period in 2021, followed this week by an announcement of an 8.9 percent increase in the price of diesel.

The high cost of gasoline, diesel and household gas has put pressure on the prices of other products, generating dissatisfaction with the government and Bolsonaro, who is seeking a second presidential term in the country's October elections.

'Like an Inferno:' US West Burning at Furious Pace 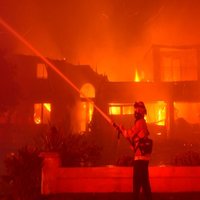 'Like an Inferno:' US West Burning at Furious Pace

US airlines seek end to Covid testing for international travel

Compensation to victims of 2021 condo collapse OKd at $1 billion

Massacre at Buffalo, NY, being treated as hate crime